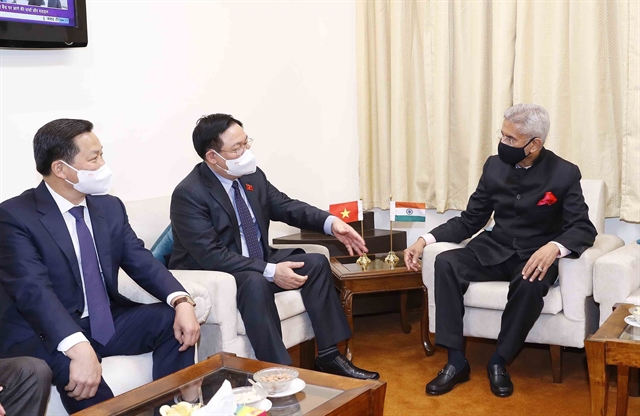 Speaking highly of their close coordination at regional and international forums, especially when the two countries are non-permanent members of the United Nations Security Council this year, he wished that India would back Việt Nam’s bid for seats at international organisations and agencies.

Jaishankar, for his part, stressed that India attaches special importance to Việt Nam’s increasingly improved role in the region and the world, and in ASEAN in particular. He wished that Việt Nam would continue serving as a bridge promoting closer linkages between India and ASEAN.

They shared the view that the bilateral comprehensive strategic partnership is growing on the five pillars of politics-diplomacy, national defence-security, economy-trade-investment, science-technology, culture-sport and people-to-people exchange. The two countries are actively carrying out the 2021-2023 Action Programme and the Joint Vision for Peace, Prosperity and People adopted in December 2020.

Both sides agreed to step up ties in education-training by increasing India’s scholarships for Việt Nam, as well as offer all possible support to energy cooperation, including exploration and exploitation of oil and gas at sea, a field of India’s strength.

On regional and global issues of shared concern, they affirmed that Việt Nam and India will continue backing efforts to step up the settlement of disputes via peaceful means in line with international law, including the 1982 United Nations Convention on the Law of the Sea, for the sake of peace, cooperation, stability and development in the region and the world.

National Assembly Chairman Vương Đình Huệ attended a ceremony marking the fifth anniversary of Việt Nam-India comprehensive strategic partnership in New Delhi on December 17.
In his speech, Indian Minister of External Affairs Subrahmanyam Jaishankar said India always considers Việt Nam an important partner and wished that bilateral ties would become increasingly closer, contributing to peace, stability and development in the region.
He also hoped that the two nations would tap their potential to support economic development in each country.
Chairman Huệ said Indian political parties support friendship with Việt Nam. Over the past five years, important achievements have been made in all pillars of the bilateral comprehensive strategic partnership.
He said the two countries share similar viewpoints on strategic issues and highlighted the need to maintain peace, maritime and aviation freedom in line with international law and the 1982 United Naitons Convention on the Law of the Sea.
The top legislator affirmed Việt Nam’s policy of treasuring ties with India and supporting India’s Act East policy. Việt Nam backs India’s bid to become a non-permanent member of the United Nations Security Council when the organ is expanded, he said.
He also proposed the two nations work closely together to carry out the 2021-2023 Action Programme for bilateral comprehensive strategic partnership as well as the Joint Vision Statement for Peace, Prosperity and People.

A photo exhibition, highlighting 50 years of the Việt Nam-India diplomatic relations, opened in New Delhi on December 17 as part of the ongoing official visit of National Assembly Chairman Vương Đình Huệ to India.The event is co-organsed by the Vietnam News Agency (VNA), the Indian Council of World Affairs, and the Vietnamese Embassy in India, welcoming NA Chairman Huệ and Indian External Affairs Minister Subrahmanyam Jaishankar as visitors on its opening day.On display are 21 documentary photos by the VNA capturing milestones in the nations’ ties over the past five decades, which include Indian Prime Minister Narendra Modi’s official visit to Vietnam in September 2016. During Modi’s visit, Việt Nam and India decided to upgrade their bilateral relations to comprehensive strategic partnership.

The event will last until December 19. — VNS

He will be visiting the Southeast Asian country during December 21-22 at the invitation of the King of Cambodia Norodom Sihamoni.

Chairman of the National Assembly (NA) Vương Đình Huệ met with Indian Vice President and Chairman of the Council of States Venkaiah Naidu in New Delhi on Friday as part of his official visit to India.

The Ministry of Foreign Affairs on held a conference on Party building and Party overseas branches work within the framework of the 31st National Diplomacy Conference.

The Central Military Commission ((2020-2025 tenure) held their third meeting in Hà Nội on Thursday to review the implementation of military and defence tasks in 2021.

National Assembly Chairman Vương Đình Huệ held talks with Speaker of the Lok Sabha (House of Representatives) of India Om Birla on Thursday during his official visit to India.

The Chargé d'Affaires of Việt Nam to the United Nations, Ambassador Phạm Hải Anh, has called upon all sides involved to fully implement South Sudan’s Revitalised Peace Agreement toward the planned elections for 2023.

Exotic dining in the middle of nowhere