Bảo swims his way out of poverty

Phạm Thanh Bảo looked up at the electric board above the pool the moment he touched the wall at the end of the men's 100m breaststroke, before slapping the water in delight.

HÀ NỘI — Phạm Thanh Bảo looked up at the electric board above the pool the moment he touched the wall at the end of the men's 100m breaststroke, before slapping the water in delight.

Wei of Singapore finished second and Gagarin Nathaniel Yus of Indonesia was third.

Making his victory all the sweeter was his time of 1min 1.17sec, a new national record. The previous record had stood since the 2009 SEA Games in Laos, set by the late Nguyễn Hữu Việt.

Furthermore, his time also set a new Games record, beating the 1:01.46 set by James Daiparines of the Philippines at the last SEA Games. He is the first swimmer to set a new record at this year's Games.

"I am so happy with this result. Thank you for all your support," Bảo said.

"I didn't think I could reach such achievement. But I have made it. I don't know what to say now. I will try harder for better."

Swimming is a passion

Bảo is the only child from a poor family in the southern province of Bến Tre.

They live in a tiny house in Bến Tre City, in which there is only one bed for his grandmother. The rest of the family members slept on the ground.

Both of his parents struggle for work. His mother is a part-time kitchenhand in restaurants, or cleans houses, earning VNĐ30,000 (US$1.3) an hour if hired. His father earns money picking coconuts but earns nothing if it rains. 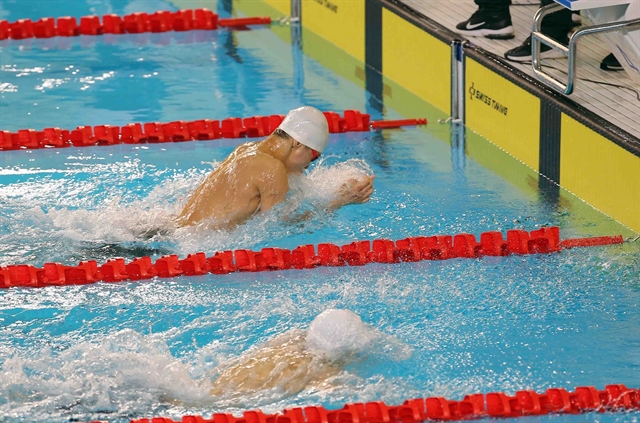 Bảo, born in 2001, grew up in poverty but he loved sports - athletics, football and especially swimming.

Having typical swimming characteristics such as a long arm span, good fitness and a swimmer's body, Bảo was scouted to the Cần Thơ Sports Training Centre when he was 12 years old.

"We did not agree to let him go because we wanted him to study and have a job. Sport to me is not a profession," Bảo's mother said.

"But he was really determined and coaches pushed and encouraged a lot so we let him choose his future," she said.

2016 was an important year in his athlete life. The 15-year-old Bảo, after nearly four years of training, grabbed his first golds in 100m and 200m breaststroke events at the National Youth Swimming Championship. His time of 1:06.26 was the new national junior record in the 100m breaststroke.

In the same year, he won and set a new national junior record in the 200m breaststroke of 2:23.65 at the National Swimming Championship.

He also dominated in these events at the Southeast Asian Age Groups Swimming Championship, helping Việt Nam to finish on top of the medal tally in late 2016.

He was called to the national team and made his SEA Games debut in 2017. In Kuala Lumpur, Bảo and his teammates won a bronze in the 4x100m relay.

Swimming is his passion but Bảo also knew that swimming will help his family get out of difficult life.

"I have a dream, a big one. I want to build a good house for my parents and grandmother to live in more comfort. I am so sad seeing them suffering and struggling," Bảo said in an interview after his bronze medal.

"So, I will try to swim well. Hopefully, one day I will win a gold medal at the SEA Games."

Two years later, Bảo took responsibility for Việt Nam in the 100m and 200m breaststroke events. Bảo grabbed two silvers and set a new national record of 2:12.84 in the latter one.

At this Games, his dream has come true. 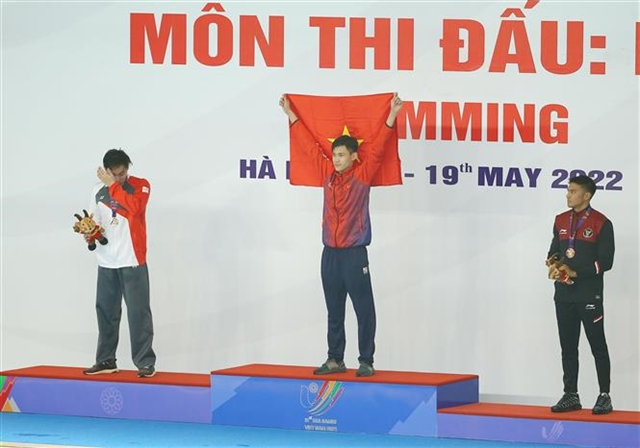 Phạm Thanh Bảo (centre) is the first swimmer to set a record at the 31st SEA Games in Hà Nội on Saturday. — VNA/VNS Photo Phạm Kiên

The gold medal brings Bảo a bonus of VNĐ10 million ($432) as announced by the Việt Nam Team leaders. He will also receive VNĐ45 million ($1,945) as per regulation of the Government and another VNĐ20 million ($864) for his record.

He has achieved his goal of changing his family's fortunes through swimming.

"I don't have any secret, I just train hard and do my best. I am swimming for myself and my family. I hope with this gold my family will have a better life," he told the media on Saturday.

"I still have the 200m breaststroke ahead. I will focus on it and try to have a good result in this special SEA Games on home ground." — VNS

Minh to take record of most appearances at badminton world championship

Coach Chung to lead national women's team until end of 2023

Long jumper Thảo ready to leap back into competition

The SEA Games 31 marks the return of Bùi Thị Thu Thảo in the long jump category which will start today in Hà Nội.

In the men’s pair at Thuỷ Nguyên Rowing Centre of Hải Phòng City on May 14, Indonesians Denri M Al Ghiffari and Ferdiansyah made their best finish in 6min 57.72sec, one minute faster than the host duo Trần Dương Nghĩa and Phan Mạnh Linh, who finished second in 7min 2.71sec for silver.

Athletes from Việt Nam and Philippines win golds in the second day of the fencing sport in the SEA Games 31 in Hà Nội on May 14.

Golden day in swimming for VN

Vietnamese fencer Bùi Thị Thu Hà came from behind to win gold in women's sabre while Tian Wei Jonathan Au Eong of Singapore championed the men's foil event at the SEA Games in Hà Nội on May 15.

Trần Hưng Nguyên set a new record in the SEA Games 31 men's 400m medley on May 15 at the Hà Nội Water Sports Palace.

Proving that gymnastics is a gold mine for Team Philippines, Carlos Edriel Yulo won two gold medals and Filipino-American Aleah Finnegan took another on May 15 in Hà Nội.

Middlemen to blame for mounting prices