A series of photos entitled Bikes of Hanoi is among finalists for the Sony World Photography Awards 2020 Professional competition.

HÀ NỘI — A series of photos entitled Bikes of Hanoi is among finalists for the Sony World Photography Awards 2020 Professional competition.

The series, taken by London-based photographer Jon Enoch, was selected from 135,000 entries, a record number for the photography competition.

This year’s competition is divided into ten categories – Architecture; Creative; Discovery; Environment; Documentary; Landscape; Natural World and Wildlife; Portraiture; Sport and Still Life. The winner of each category will be announced at the awards ceremony to be held in London on April 16. 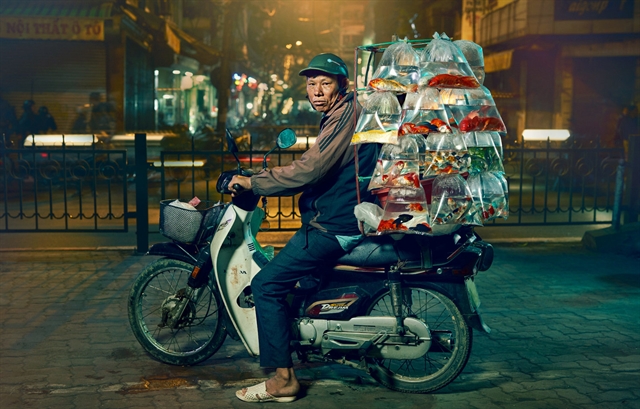 One photo in the series Bikes of Hanoi by London-based photographer Jon Enoch. The series has been shortlisted for the Sony World Photography Awards 2020 Professional competition. — Photo jonenoch.com

Bikes of Hanoi was shortlisted in the Portraiture category.

Earlier, the series won gold at the Paris Photo Prize 2019.

"Delivery drivers on the streets of Hà Nội, Việt Nam, use their amazing balance skills to deliver goods to shops and vendors across the city, while some riders sell directly from their bikes.

“New legislation plans to ban motorbikes from the city by 2030 in a bid to improve air quality and reduce congestion. In addition to this, the country’s rapid economic expansion has led to an increased use of vans for commercial deliveries, instead of bikes.

“When I read about this, it struck me that the age-old art of riding an overloaded bike might be soon coming to an end. As a result, I spent a week in Hà Nội, chasing down riders and convincing them to pose for the camera. Their cargoes included footballs, water, car parts, eggs, pet fish and ice," Enoch said about his series on worldphoto.org.

The awards, now in their 13th year, include four competitions – Professional (for a body of work), Open (for a single image), Student (for academic institutions) and Youth (for 12-19 year-olds).

The Professional competition rewards and showcases series that are technically brilliant, exciting and offer a fresh perspective on contemporary photography. — VNS

A folk painting style on the verge of fading away

HCM City residents' fear of the coronavirus has led to a relatively empty HCM City, a normally vibrant city with many interesting entertainment activities.

The ceremony has been held for hundreds of years, honouring the principles of marriage, family happiness and uniting people in their family and community.

A species of jellyfish hunts its prey by hurling venom grenades to create "stinging water", researchers said Thursday, solving a long-standing mystery as to how they gather food without tentacles.

The entire board of the Cesar Academy, which awards France's equivalent of the Oscars, resigned Thursday just two weeks ahead of its gala ceremony after more than 200 actors, producers, directors and movie personalities demanded "profound reform".

A visit to the Central Highlands region of Việt Nam offers plenty of incredible tourist experiences, including drinking fresh coffee in the hills and playing with cute puppies.

Parasite to be rescreened in Việt Nam after Oscar scoop

Parasite will hit cinemas in Việt Nam once again after dominating this year's Oscars, winning the Best Picture award, becoming the first ever non-English-language film to scoop the movie industry's biggest prize.

Vietnamese photographers have won prizes at the 5th Balkan Exhibition.

The bill to repair London's iconic Big Ben clock tower has increased by millions of pounds after the discovery of World War II bomb damage, pollution and asbestos, Britain's parliament said on Thursday.

US actress and #MeToo activist Rose McGowan has dismissed as a "fraud" Natalie Portman's Oscar dress embroidered with the names of female filmmakers overlooked for best director nominations.

Mining sector must push for greater implementation of technology