The potential is great, but Vietnamese shipping enterprises’ development and operation has not been commensurate with the role and position of the country. 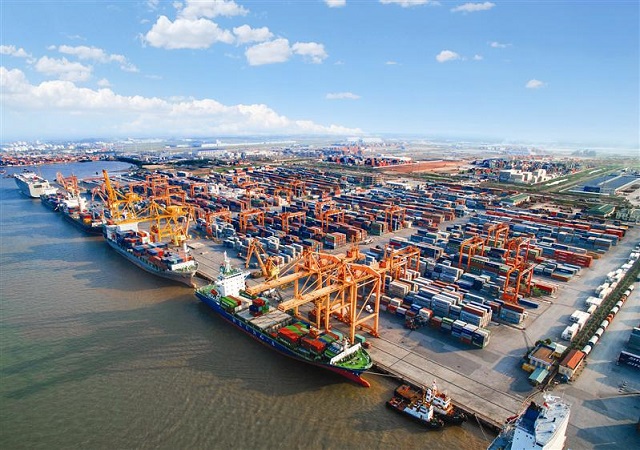 There were 1,502 ships under the Vietnamese flag as of December last year. — Photo ndh.vn

HÀ NỘI — The potential is great, but the development and operation of Vietnamese cargo shipping has not been commensurate with the role and position of the country.

In the project to develop Việt Nam's international shipping fleet by the Việt Nam Maritime Administration (Ministry of Transport), the administration said that the country's seaport system in recent years has developed relatively synchronously and modernly and is able to welcome some of the world's largest ships.

However, containers of goods imported and exported to/from Việt Nam is mainly handled by foreign shipping lines, especially on long-distance sea routes from/to developed countries such as Europe and the US.

The domestic fleet currently mainly undertakes domestic transportation and short international routes in Asia. The international shipping market share of Việt Nam's shipping fleet has been on a downward trend in recent years.

The fleet structure is not as good as it could be with mainly small tonnage ships carrying dry and bulk cargo. There is a lack of container ships and large tonnage ships operating on international routes.

There were 1,502 ships under the Vietnamese flag (excluding data of ships under construction) as of December last year, with a total tonnage of about 7.15 million GT and 11.7 million DWT.

The number of ships has decreased by over 200 last year compared to 2016, equivalent to a decrease of 17.2 per cent.

On the basis of the situation of the international transport market and the growth trend of goods through Việt Nam's seaports over the years, the maritime administration shows that there is a huge potential for developing an international shipping fleet.

However, Vietnamese shipping enterprises’ development and operation have not been commensurate with the role and position of the country.

The Việt Nam Maritime Administration proposed many solutions to develop Việt Nam's shipping in the 2021-26 period, with a vision for 2030.

Accordingly, the first is to renovate mechanisms and reform administrative procedures, creating a stable and favourable legal corridor to support businesses to operate effectively.

Regarding the financial solution, ship owners should be allowed to not pay VAT when importing ships to transport goods for Vietnamese goods owners until the end of 2026; exempt import tax and reduce 50 per cent of tonnage fees when ship owners buy and operate container ships of 1,500 TEUs or more or ships powered by clean energy and LNG carriers.

The State Bank of Việt Nam has a policy that allows Vietnamese ship owners who have ships operating on international routes with foreign currency revenue to be allowed to borrow foreign currency to invest in buying ships.

Another important solution is to improve the quality of crew members. The Việt Nam Maritime Administration recommends calling for private investment in human resource training, including domestic and foreign training.

There are policies and special incentives for employees of the shipping industry in order to encourage workers to stick with the work for a long time.

The deputy minister affirmed that he would continue to gather suggestions and opinions from businesses and associations to complete this important project in detail. — VNS

Real estate transactions should be performed on trading floors: MoC

The first Danish FDI factory in An Giang starts running

Supply shortage pushes up prices of many drugs

Việt Nam's trade turnover up 15.6 per cent in five months

Việt Nam’s total trade turnover in the first five months of 2022 experienced a year-on-year increase of 15.6 per cent to US$305.1 billion, a report from the General Statistics Office (GSO) has shown.

Commercial banks are expecting to have higher credit growth limits in Q2 2022 as they have already used up most of their assigned quota this year.

International arrivals to Việt Nam jumped significantly in May while the country rose to be among the most-searched destinations after international tourism reopened.

Shares had a good start on Monday, driven by the strong growth of blue chips in the banking and aviation stock groups.

Stocks subject to trade under restriction on HOSE can only be traded in the afternoon session of the trading day by centralised matching and put through trading method.

Việt Nam’s tourism has stepped up eight places on the 2021 Tourism and Travel Development Index (TTDI), according to the World Economic Forum (WEF) Report.

Việt Nam has great potential to increase fruit exports to the US in the future.

Vietnamese enterprises are facing rising costs in fuels and materials for production due to the ongoing Russia-Ukraine conflict, experts have said.