With the FIFA Women's World Cup Australia and New Zealand 2023 just a year away, the homepage of the Asian Football Confederation (AFC) has just published an article identifying the top six Asian stars who are expected to shine at the event, including Vietnamese striker Huỳnh Như. 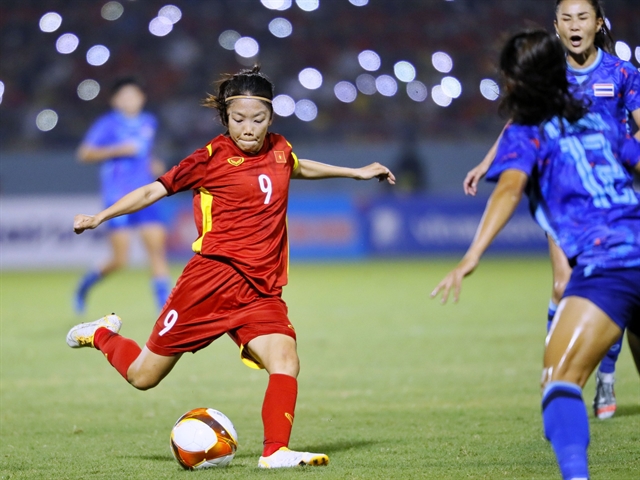 Huỳnh Như (left) competes in the SEA Games 31 in May. She is expected to shine at FIFA Women's World Cup 2023. — Photo thanhnien.vn

HÀ NỘI — With the FIFA Women's World Cup Australia and New Zealand 2023 just a year away, the homepage of the Asian Football Confederation (AFC) has just published an article identifying the top six Asian stars who are expected to shine at the event, including Vietnamese striker Huỳnh Như.

“Việt Nam's qualification for their first FIFA Women's World Cup Finals is just reward for Như who has been so integral in the Southeast Asian side's phenomenal improvement,” the the-afc.com said.

“The 30-year-old Như has been a national team regular since 2011 and the forward's goals have powered Việt Nam from one success to another. The FIFA Women's World Cup, however, will be a challenge at a different level altogether and Việt Nam will need the talismanic Như to be at her best to power them in Australia and New Zealand 2023,” the website added.

Besides Như, the AFC also named five other stars: Sam Kerr of Australia, Wang Shanshan of China, Saki Kumagai of Japan, Ji So-yun of South Korea and Sarina Bolden of the Philippines.

South Korean Ji has recently called time on a hugely successful career with English side Chelsea to return to South Korea. Ji will be crucial if the Taeguek Ladies are to advance to the knockout stage for a second time since 2015, with their campaigns in 2003 and 2019 ending at the first hurdle.

While Kerr, Australia's all-time leading scorer, will be looking to continue from where she left off in 2021-22 ahead of the FIFA Women's World Cup on home soil in 12 months.

A fabulous 2021-22 season included 40 goals in 41 matches for club and country – 29 in 30 for Chelsea, 11 in 11 for Australia – and included a swag of individual honours in addition to the League and Cup double.

Meanwhile, Như is one of the most prominent players in Vietnamese women's football. She has won the Golden Ball award four times. She also made important contributions to the Vietnamese women's team to win gold medals at the SEA Games 2017, 2019 and 2022, along with the AFF Cup 2019 championship.

Although the Vietnamese women's team were unsuccessfully at the recent Southeast Asian Women’s Football Championship, she still left a strong mark with seven goals. She is the best scorer in the history of Vietnamese women's football with 59 goals for the national team. — VNS

Run for Peace returns this weekend after two years

Gamers helping to change the game

With the rising popularity of the women’s game, boosted by the current Euro 2022 tournament, the need for gender equality is loud and clear.

Hải Phòng FC temporarily top the team rankings at the V.League 1 following their 3-1 win against Bình Định on Tuesday.

Vietnamese athletes will bring home four golds from the Asian Bodybuilding and Physique Sports Championship after their strong success in the Maldives on Tuesday.

Việt Nam representative Quách Thị Lan failed to qualify for the semi-finals of the women's 400m hurdles at the World Athletics Championships on Thursday in Oregon, the US.

Vietnamese athletes with disabilities are ready for medals at the 11th ASEAN Para Games after their send-off ceremony held on Thursday morning in HCM City.

Việt Nam will send 53 athletes to compete at the 20th ASEAN University Games (AUG) which will be held in Ubon Ratchathani, Thailand, from July 26 to August 6.