Midfielder Tuấn Anh not satisfied with his performance

Despite picking up the best player award in Việt Nam's win over Malaysia on Sunday night, midfielder Nguyễn Tuấn Anh believes there is plenty of room for him to improve. 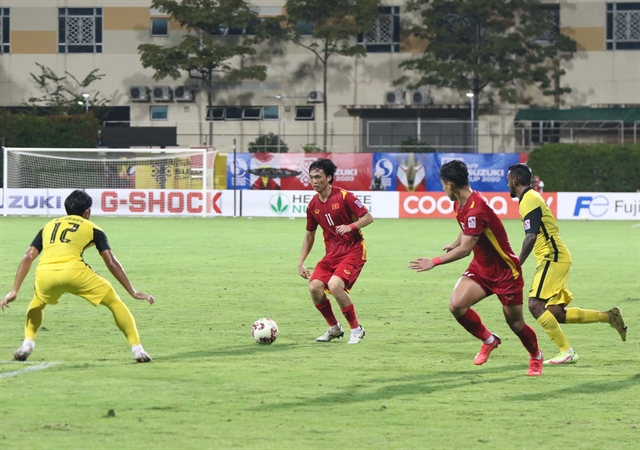 Midfielder Nguyễn Tuấn Anh (No 11) had an outstanding performance in the match between Việt Nam and Malaysia in the AFF Cup 2020 on Sunday. — Photo courtesy of the VFF

HÀ NỘI — Despite picking up the best player award in Việt Nam's win over Malaysia on Sunday night, midfielder Nguyễn Tuấn Anh believes there is plenty of room for him to improve.

Việt Nam crushed Malaysia 3-0 in their second match of the AFF Cup at the Bishan Stadium in Singapore, with Anh making his debut in the AFF Cup tournament.

"Because of the COVID-19 pandemic, the V.League 1 was interrupted, I have not played much," he said. "I am not satisfied with my performance in the match with Malaysia. There are still regrettable situations. However, I tried my best in my first match at the AFF Cup and will continue to do my best in the next matches."

Anh played the full 90 minutes and had a role in two of the goals, first placing a pinpoint pass to Nguyễn Quang Hải who opened the scoring on 32 minutes.

In the second half, his pressure paid off and he won the ball in midfield before setting up midfielder Nguyễn Hoàng Đức to score the third.

In addition to the two assists, Anh's overall play was impressive, completing 67 successful passes with an accuracy rate of 94.4 per cent

This is also the first time in more than two years that Anh played a full 90 minutes for Việt Nam team. The last time was in a 0-0 draw with Thailand in September 2019 in the second qualifying round of the 2022 World Cup.

Anh is considered one of the most talented midfielders in Vietnamese football today.

Đoàn Nguyên Đức, HAGL’s manager, spoke highly of him when he first burst onto the scene, claiming he was as good as, if not better than striker Nguyễn Công Phượng and midfielder Lương Xuân Trường. But in the past six years, Anh has suffered more than 13 injuries and many surgeries, causing his career to be interrupted and his contribution to the club and the national team has been limited.

Anh’s knee injuries deprived him of the opportunity to play at two previous AFF Cup tournaments in 2016 and 2018.

Anh was once considered by coach Nguyễn Hữu Thắng as an important factor when building a way of playing for Việt Nam towards the AFF Cup 2016. But before returning home to focus on the team, he suffered a knee injury while training with the Japanese club Yokohama. He was still on the list of 25 players going to Myanmar to compete in the Cup, but he could not train and had to return home before the AFF Cup began.

In 2018, a knee injury in the V.League 1 forced Anh to take a long spell on the sidelines, missing the AFF Cup which Việt Nam won.

A year later, Anh returned to the national team and was immediately used by coach Park Hang-seo in important matches in the 2022 World Cup qualifiers. In the opening match of the AFF Cup this year which Việt Nam beat Laos 2-0, Anh was given a rest. Therefore, the match against Malaysia was the first time in his career that he played in the AFF Cup.

According to football expert Phan Anh Tú, every Vietnamese player played well in the match against Malaysia, but he was most impressed with Anh.

"We don't see an Anh with “crystal” legs anymore, but he has played strongly, fiercely, and effectively with his best physical strength. This can be a big step for him to shine in the AFF Cup this year," said Tú.

Việt Nam will meet Indonesia in the next match on December 15. A win will surely be enough for Việt Nam to qualify for the semi-finals. — VNS

'The King' back in action, set to win LEAD: The Begining

Run for Peace returns this weekend after two years

Việt Nam brought home three gold medals at the the World Muaythai Championship, which closed in Thailand on Sunday.

The comfortable win was a reminder of how far ahead of some of their Southeast Asian Việt Nam are, in stark contrast to the struggles of the World Cup campaign against the likes of Japan and Australia.

Việt Nam take on Malaysia tonight in the AFF Cup, a rematch of the 2018 final when coach Park Hang-seo’s men triumphed. Kick-off is at 7.30pm, follow along here for live updates so you don’t miss a kick!

Goalkepper Mạnh to redeem past mistakes at 2021 AFF Cup

Five years after his mistake cost Việt Nam a place in the final of the 2016 AFF Cup, he is back with the national team determined to make amends.

A shadow of their former selves

Europe’s best of the best has been decided and will begin the knock-out stages of the Champions League in February next year.

Since scoring against the Philippines in the 2018 AFF Cup, it has taken Phan Văn Đức three years to finally end his goal drought, netting in the 2-0 victory against Laos.

The SEA Games is always a priority for Vietnamese athletes. Now, the chance to compete at a Games on home soil has drawn former champions like Trần Thị Yến Hoa out of retirement.

Real estate transactions should be performed on trading floors: MoC