The National Election Council (NEC) convened the first session in Hà Nội on Monday to make preparations for the elections of deputies to 15th legislature and all-level People’s Councils for 2021-2026. 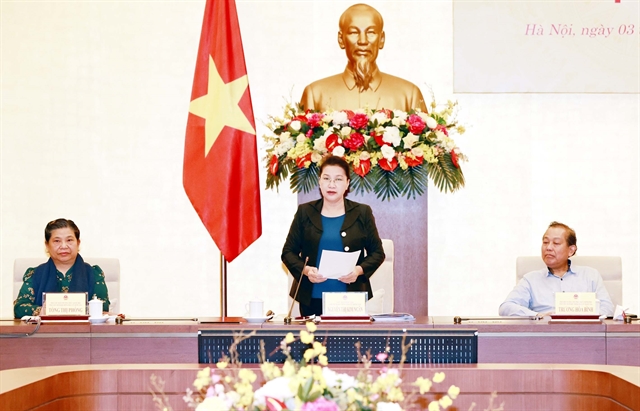 HÀ NỘI — The National Election Council (NEC) convened the first session in Hà Nội on Monday to make preparations for the elections of deputies to 15th legislature and all-level people’s councils for 2021-26.

It was chaired by National Assembly Chairwoman Nguyễn Thị Kim Ngân who is also the council’s chairperson.

During the session, participants gave their opinions on the draft documents relating to the operation of the NEC.

Specifically, the NEC gave opinions on the draft resolution assigning members of the NEC, draft agenda, working regulations and the establishment of the Office of the National Election Council as well as the appointment of the head of the Office.

The National Election Council will be responsible for guiding and directing elections in accordance with State regulations. It will coordinate with the NA Standing Committee, the Government, the Việt Nam Fatherland Front and other relevant agencies in performing tasks as defined in the Constitution and laws.

The National Assembly elected the chairperson for the NEC, approved the list of vice chairpersons and members of the NEC and passed a resolution on the establishment of the NEC at the ninth session of the 14th legislature on June 11 in Hà Nội. — VNS

Experts of leading economic organisations highlighted the need for international and trans-sectoral co-operation in response to the COVID-19 pandemic and to recover the economy at a virtual high-level dialogue on ASEAN's post-pandemic recovery on Thursday.

Chairwoman of the National Assembly Nguyễn Thị Kim Ngân said she hoped that New Zealand and Việt Nam would step up economic, trade, and investment ties following the establishment of their strategic partnership.

The UN Security Council expressed concern over growing violations of the ceasefire in Yemen during its monthly meeting on this Middle Eastern country on Tuesday.

Two suspects of a bank robbery on Huỳnh Thúc Khánh Street, Hà Nội have been arrested, police said on Wednesday.

The decision was made at a meeting of the Secretariat in Hà Nội on Tuesday under the chair of Party General Secretary and President Nguyễn Phú Trọng.

Solving housing issues for workers a key target for the labour sector: PM

HCM City to face economic challenges, recovery to be hit