Việt Nam may not be meeting its development potential to exploit wind power to provide energy to the country. 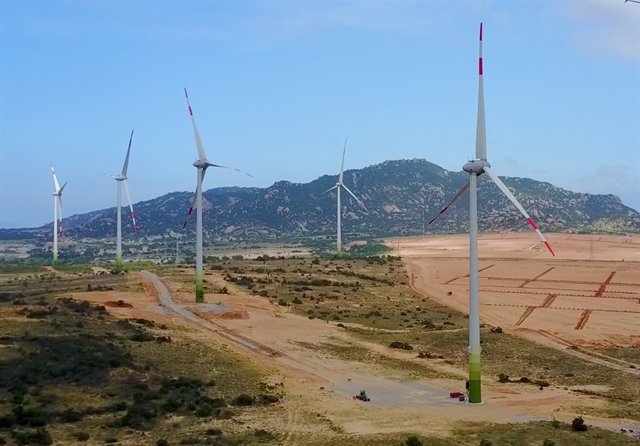 Some wind power projects have been built in the central province of Ninh Thuận. — VNA/VNS Photo Công Thử

HÀ NỘI — Việt Nam may not be meeting its development potential to exploit wind power to provide energy to the country.

A report has been released by the Ministry of Industry and Trade (MoIT) outlining the current power produced nationwide through wind farms.

It says the country is falling short, and could generate much more power to help fuel the nation in a safer, more environmentally friendly manner.

The report revealed that as of March this year, an additional 78 wind power projects capable of producing 4,880 megawatts have been added to the Power Development Plan.

Eleven are currently operational and a further 31 are waiting to be finished and should be up and running either this year or next.

The report also stated another 250 wind power projects are currently at the proposal stage.

But despite these projects having a capability of generating 45,000MW each year, they are not proving attractive for potential investors.

Chairman of the Bình Thuận Wind Power Association Bùi Văn Thịnh told Vietnam News Agency that even though these projects could help power the country, completing them is not so simple – especially off-shore farms.

He said: “Handing over the surface of the sea to the investors faces many procedures as it relates to not only the normal land lease but also the national defence and security.

“There is a lack of policies to develop offshore wind power.”

Investors are concerned some of the projects may not meet the 18 month deadline set by the Government in order to attract a decent price per kWh.

If that deadline is met, and wind farms are up and running in time, they could charge as much as VNĐ1,770 (7.8 US cents) per kWh over the next 20 years.

Thịnh believes this is not enough time to get approval, build and begin producing energy in time for investors to take bait.

He hopes the Government will consider extending the deadline and support businesses willing to take a chance with future investments.

Thịnh says because of the COVID-19 pandemic, the timeframe must be reconsidered, as many investment firms are reconsidering their positions due to the virus.

“An extension of the deadline is necessary for businesses.”

The MoIT is concerned that there will be a shortage of electricity in the next five years, particularly in the south of the country, even if oil-powered sources run at maximum capacity.

It has also backed calls to extend the deadline for completion of projects to 2023. — VNS

Market to enjoy gain thanks to supportive information

Shares may continue to enjoy growth this week on hopeful signs about the containment of the government over the coronavirus outbreak and a handful of other supportive information.

Ministry to set up research group on cryptocurrency to tighten management

The Ministry of Finance has decided to set up a research group which would be in charge of studying and proposing policies to manage virtual assets and crypto currency.

The COVID-19 pandemic was basically under control in Viet Nam, so it was time to restart the local economy, said Prime Minister Nguyễn Xuân Phúc at a meeting with businesses on Saturday.

Many wood processing firms have managed to operate despite the Covid-19 pandemic and many have even chalked out measures to take advantage of the opportunities on offer when the pandemic is over.

Prime Minister Nguyễn Xuân Phúc has called for greater efforts to restart the national economy with the aim of achieving a GDP growth rate of over 5 per cent and keeping inflation under 4 per cent this year.

Việt Nam’s seafood exports will continue to see reductions in next few months due to the pandemic, according to the Việt Nam Association Seafood Exporters and Producers (VASEP).