The SEA Games is just a short sprint away, and now is the time athletes across the country are putting in the final legwork to make sure they are fit, in peak condition, and ready for the off.

HÀ NỘI — The SEA Games is just a short sprint away, and now is the time athletes across the country are putting in the final legwork to make sure they are fit, in peak condition, and ready for the off.

Performing on home soil is also a huge incentive for our stars to show off their skills.

Long-distance runner Đặng Anh Quyết can’t wait to hit the track and compete, even though he is still to turn professional.

Organisers of the 31st Games have opened up the marathon to 200 amateur runners who will get the chance to go head-to-head with elite athletes from the region.

This opportunity has sent Quyết in a spin, and he is desperate to show the country what he can do. 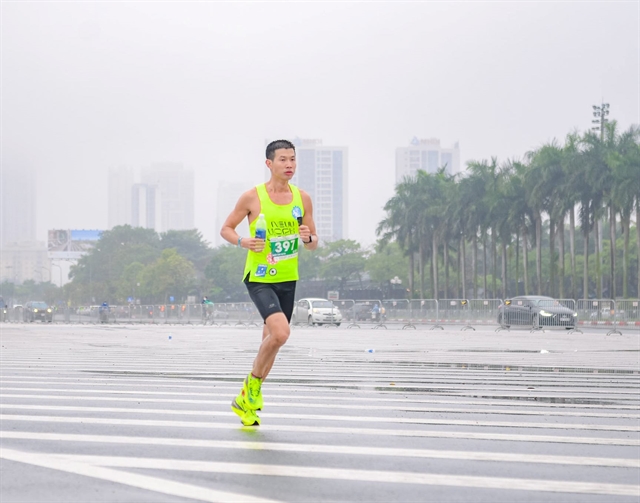 At the VPBank Hanoi Marathon in early March, the 32-year-old made his dream come true after finishing in top three overall to earn a place at the games. His time was even better than a professional, national team member.

Run to live, live to run

As student, he started running to keep fit, but just a couple of kilometres each day. After graduating as an engineer, he moved to HCM City in 2014 where he continued running.

“I never thought I could run such a long distance,” he told Việt Nam News.

“When I was a student I just ran several laps around Hà Nội’s Thống Nhất Park. But gradually I managed longer routes and I completed my first half marathon (21km) under two hours by the end of 2014.

Đan Quyết finished second at the Tiền Phong Newspaper Marathon's amateur class in 2021. He sets a plan to top the podium this year. — Photo of Tiền Phong Marathon

His love for running grew and grew, and Quyết quit his job as an engineer to be a marathon athlete and coach.

In the past two years, he entered a number of tournaments, winning seven and finishing second in four.

Although Quyết has only been competing as an amateur, elite runners took note of his abilities. In the past three years, he has finished every race in under three hours.

His personal best at the 2022 VPBank Marathon was the fastest ever run by an amateur in the country and was enough to grant him a place at the SEA Games.

“Completing the VP Bank Marathon in 2 hours 37 minutes was planned,” said Quyết who trains by running 120km every week.

“I worked really hard to complete that task. I was happy to know that I am the fastest amateur runner in Việt Nam.

“Being one of 200 runners at SEA Games was also my target and I made it.

“The marathon is a harsh event. I believe with the company of strong amateurs, the elite runners will feel encouraged and push for best result.”

Later this week, Quyết will take part in the Tiền Phong Newspaper Marathon, which is a key event in the national athletics tournaments system.

Đan Quyết competes at the Half marathon Bình Dương in February. He finishes first with a time of 1:14:26. — Photo courtesy of Đan Quyết

It will be his sixth time running Việt Nam’s oldest and biggest marathon which lures more than 3,700 competitors vying for medals in both elite and amateur disciplines in categories ranging 5km to 42km in Côn Đảo Island, Bà Rịa-Vũng Tàu Province.

“I am training hard and counting the days to March 27, hoping that I will run well,” said Quyết who finished second in amateur pool last season. “And of course I keep my eyes on the top podium.”

The Tiền Phong Marathon is also an important preparation for the SEA Games in Hà Nội in mid-May.

Although representing Việt Nam is a great honour, Quyết is not just there to make up the numbers.

“I definitely want to be SEA Games’ (amateur) champion”. 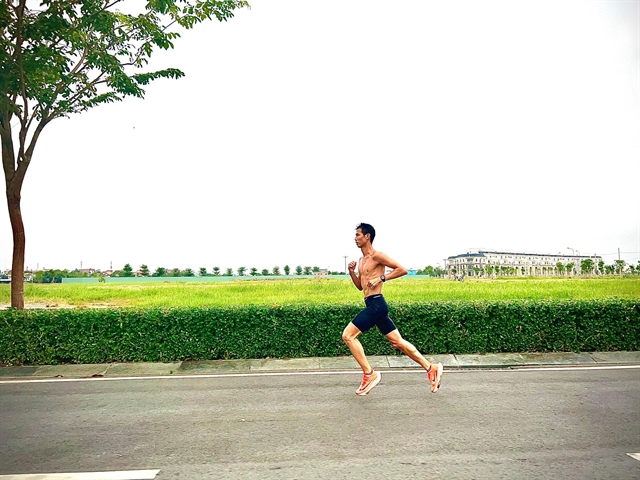 Đan Quyết is training hard for the top amateur place at the SEA Games. — Photo courtesy of Đan Quyết

In the future, he wants to run around the world, at marathons in Boston, London and Tokyo.

But first he knows he must get even better.

“With my current time, I have already qualified for these marathons,” he said.

“However, I want to run faster. The first milestone I want is 2:35.00 next year and then I will be ready for big competitions.

“Hope that I will soon get the chance to stand on the start line in Boston.” — VNS

Viettel FC aim for a top three finish in the upcoming V.League 1

'My goal is always the same': Linh aims to be V.League 1 top scorer

Coach Park under pressure ahead of Oman match

Việt Nam coach Park Hang-seo admitted to the high pressure ahead of the 2022 World Cup qualifying match against Oman on March 24 at the Mỹ Đình Stadium in Hà Nội.

The golden boy of Vietnamese football will leave his current club Hà Nội FC next month. Nguyễn Quang Hải will become a free agent when his contract expires on April 12, sparking a race for his signature.

Team table tennis of Việt Nam has set the target of two gold medals at the 31st Southeast Asian (SEA) Games in May.

Vietnamese marathoners Bùi Văn Đà and Trần Thị Hoa won the men’s and women’s 42km in the 2022 Manulife Đà Nẵng International Marathon on Sunday (March 20) – waking up the central coastal tourism hub after a two-year absence due to COVID-19.

Việt Nam still have it all to play for

Việt Nam have already made history as the first Southeast Asian team to secure a win in the third round of qualifying thanks to their 3-1 victory over China on February 1 and they can extend that record with another at home to Oman.

National Golf Championship set to be part of VGA tour

Việt Nam won four medals at the Asian Kurash Championship, which closed on March 21 in Tajikistan.

Lê Hữu Toàn has become only the second Vietnamese athletes to win a World Boxing Association Asia belt after his victory at HCM City's Vietnamese Dream event on Sunday.

Lê Văn Công was honoured with a second-class Labour Order for his contribution to national sports in 2021 in Hà Nội yesterday, as part of the 'Việt Nam's Glory' celebration.