The total number of customers registering for and using the Mobile Money service reached more than 1.1 million by the end of March. 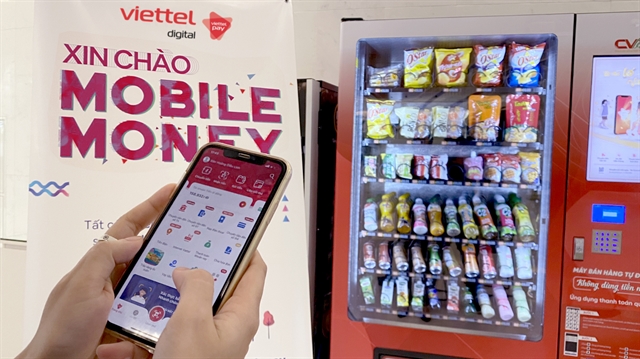 Mobile Money increases the access and use of financial services, especially in rural, mountainous, remote, border and islands of Việt Nam. — Photo viettelstore.vn

HÀ NỘI — The total number of customers registering for and using the Mobile Money service reached more than 1.1 million by the end of March.

Of which, the number of customers registering and using the service in rural, mountainous, remote, border and island areas is nearly 660,000, accounting for more than 60 per cent.

The Lao Động (Labourer) newspaper co-operated with the Payment Department under the State Bank of Việt Nam and the Việt Nam Telecommunications Authority under the Ministry of Information and Communications to organise a workshop on promoting the development of Mobile Money in Việt Nam.

More than 3,000 business points accepting Mobile Money method have been established by the end of March. In which, the number of establishments in rural, remote, border and island areas is about 900, accounting for about 30 per cent.

The total number of transactions using Mobile Money has reached more than 8.5 million with a total value of more than VNĐ370 billion (US$16 million).

Lê Anh Dũng, deputy director of the Payment Department, said that the pilot enterprises had achieved positive results and ensured safety after nearly six months of implementation, contributing to the development of non-cash payment activities, increasing the access and use of financial services, especially in rural, mountainous, remote, border and islands of Việt Nam.

Dũng assessed that the deployment of Mobile Money service had taken advantage of infrastructure and data and telecommunications networks, which has helped reduce social costs and expand cashless payment channels on mobile devices, bringing convenience to users and meetting the actual needs of people and society.

Trương Quang Việt, deputy general director of Viettel Digital Services Corporation, said that after two years of the COVID-19 pandemic, production and business activities encountered many difficulties, which makes the country realise more clearly than ever that the universalisation of digital payments is necessary.

The transition to the digital economy was a paramount task, he emphasised.

Regardless of internet connection or bank account, with just phone numbers, users across the country could make cashless transactions, extremely easily through a Mobile Money account, he said.

Especially, in the period of the new normal, Mobile Money plays an important role in expanding trade opportunities for everyone, bridging the geographical and technological gap.

Việt said that as 40 per cent of Vietnamese people do not have a bank account, the deployment of Mobile Money also created favourable conditions for the Government to carry out support activities for disadvantaged groups, people in remote areas such as the disbursement of subsidies, social security funds and loans to facilitate economic development.

The representative from Viettel said that the benefits of Mobile Money to people were undeniable.

“However, for the first time officially being licensed in the Vietnamese market, Mobile Money has also posed a problem in changing people's spending and money use behaviour,” he said.

Việt suggested Việt Nam should speed up disbursement activities, support production and business for disadvantaged groups and people in remote areas through Mobile Money, so that it would become both a method and a driving force to improve people's lives, stimulate use and bring mobile money closer to life.

Along with that, State management agencies also needed to provide orientations and work out support policies to build and further replicate non-cash payment models across the country, so all citizens soon access and accept digital payments as a familiar and convenient form of spending, he proposed.

So that, all people in all regions of the country could receive more and more benefits from the cashless economy, which motivates them to use and gradually change spending habits in daily life, he added. — VNS

Shares finish week higher on the back of steel, securities sectors

Shares advanced for a second day but liquidity fell to a low level, showing investors’ caution about the market outlook.

The impact of the COVID-19 pandemic has fueled the growth of e-commerce in many countries, including Vietnam, said Chairman of Việt Nam E-Commerce Association (VECOM) Nguyễn Ngọc Dũng.

Some 150 foreign and domestic exhibitors, including those from Japan, South Korea, mainland China, Taiwan (China), Australia, the US, Belarus and the Czech Republic are parcipating to the four-day expo - the first pharmaceutical and medical event in the capital in two years, due to the pandemic.

The Việt Nam Association of Foreign Invested Enterprises (VAFIE) released an annual report on foreign investment in Việt Nam last year at a meeting in Hà Nội on Tuesday.

Việt Nam has ample opportunities to boost exports of wooden products and furniture to the EU market in the post pandemic period, experts say.

It is necessary to diversify capital sources for the real estate market to reduce dependence on banking credit while the credit flow should be directed to target segments to ensure healthy market development, experts have said.

Overreliance on input material imports, small production value and outdated technology were among major weaknesses of Việt Nam's steel industry, said a recent report by the Ministry of Industry and Trade.

The tightening of capital flows into the real estate sector have caused real estate businesses to halt the issuance of bonds in April.

HCM City to speed up inspection of alcohol trading