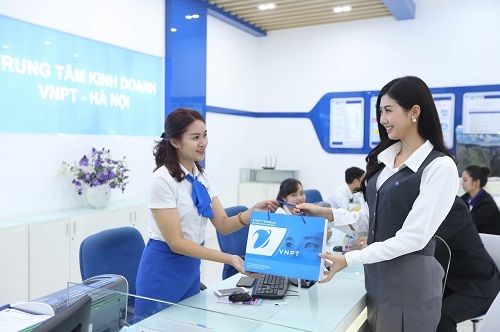 A transaction office of VNPT in Hà Nội. — Photo ictnews.vietnamnet.vn

The number of registered subscribers transferred to Viettel is the highest, with more than 2.1 million subscribers.

There have been nearly 1.7 million subscribers successfully transferred to this network, accounting for 90.7 per cent of registered subscribers.

Notably, among the above six operators, the successful transfer rate to MobiFone is the lowest.

The Việt Nam Telecommunications Authority (VNTA) under the Ministry of Information and Communications said hundreds of thousands of subscribers had not successfully switched networks.

Many users said that the main reason for this was a 'lucky SIM number' that forces them to be committed to operators or additional services that they have bought.

To solve this problem, VNTA has recently asked the telecommunications carriers to publicly announce packages and how to cancel packages on their websites for subscribers to look up before registering to MNP.

At the same time, the authority recommended businesses have plans for subscribers to compensate them if there was a need to switch networks.

The VNTA also said that after more than three years of implementation, the MNP service had created necessary competition among businesses in the saturated mobile market towards the goal of retaining and enticing subscribers to their network.

The general trend was that subscribers wanted to switch to a service provider with wide coverage and stable service quality, noted the authority.

With a market share of only about 4 per cent (equivalent to nearly five million subscribers), Vietnamobile has lost a quarter of its subscribers since the service rolled out.

The network operator loses thousands of subscribers every month.

Not only facing a massive "bleeding" of subscribers, limited bandwidth is also one of the main reasons why the operator struggles to develop new services.

A Vietnamobile representative told Việt Nam Finance online magazine that this made it difficult for the company in providing the best customer experience.

After 13 years on the market with a series of super-cheap price policies, Vietnamobile customers still complain about weak signal outside of the big cities, few agents, and poor customer service, meaning its market share has not improved. — VNS

Taste of Italy programme kicks off in HCM City

Agricultural sector urged to enhance use of by-products

The IIP in May also surged 4 per cent month-on-month and 10.4 per cent year-on-year, the GSO said, adding that the processing and manufacturing industry saw a yearly IIP rise of 12 per cent.

VN to develop digital addresses by 2025

All households across the country will have digital addresses by 2025.

MoIT to authenticate e-contracts from June

The Ministry of Industry and Trade (MoIT) has created the necessary legal framework for the authentication of electronic contracts in Việt Nam and is ready to grant operating licenses to authenticators from June.

US starts anti-dumping and anti-subsidy investigation on wooden cabinets

The US Department of Commerce (DOC) has started an investigation into made-in-Vietnam wooden cabinets, including kitchen and bathroom cabinets, that used Chinese parts that fell under the US's tariff regime, said a source from the Ministry of Industry and Trade.

he overseas Vietnamese business community plays a vital role in expanding the distribution of Vietnamese goods globally, a roundtable has heard.

Việt Nam and Malaysia have great potental to promote trade and investment with Malaysia being one of the most important importers of Vietnamese goods in Southeast Asia in the post-pandemic period, a HCM City official said.

Inflation control is one of Việt Nam’s urgent tasks, given the country’s deep integration in the world economy and its dependence on material imports, Minister of Finance Hồ Đức Phớc said at the 15th-tenure National Assembly’s third session meeting on Thursday.

Taste of Italy programme kicks off in HCM City