Under coach Park Hang-seo, Việt Nam have not lost on a match at the Mỹ Đình Stadium for three years. The hosts hope to maintain their record when facing Australia in a World Cup third-round qualification match on September 7 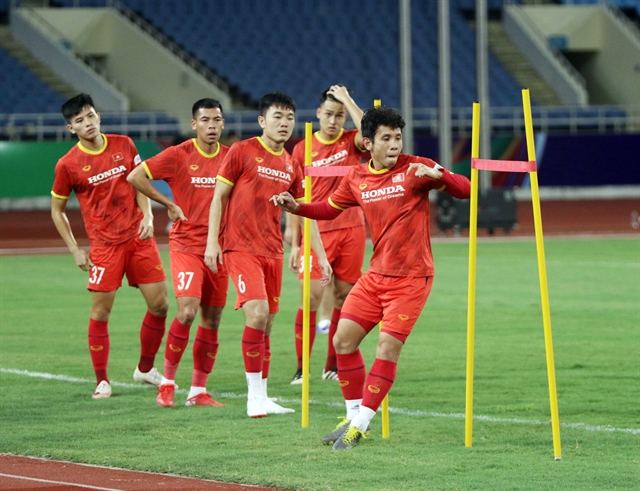 Vietnamese players practise in Hà Nội on the weekend. They will face Australia in the second match of the 2022 World Cup third qualifier on Tuesday. — Photo courtesy of VFF

HÀ NỘI — Under coach Park Hang-seo, Việt Nam have not lost on a match at the Mỹ Đình Stadium for three years. The hosts hope to maintain this record when facing Australia in a third-round qualification World Cup match on September 7 in  Hà Nội.

Under Park, Việt Nam have recorded 17 undefeated matches. Among them, they won all matches held at the stadium at the AFF Cup in 2018 before taking the championship crown. In the second-round of World Cup qualifiers, the hosts also beat Malaysia and the UAE, with a draw against Thailand.

Australia are different from previous rivals, but the Vietnamese players believe in a positive result.

“The third qualification round is tough. We have to prepare really well in spirit, technique and physique,” said midfielder Lương Xuân Trường.

“Our target is to gain as many points as possible, both home and away. Việt Nam will never give up.”

Striker Nguyễn Tiến Linh is also looking toward to the match.

“We are in the best mood to face the leading continental team. My personal goal, also of my team, is to make history and participate in a World Cup finals for the first time,” said Linh.

Coach Park faces a problem when key defender Đỗ Duy Manh was sidelined because of a red card against Saudi Arabia last week. Defender Trần Đình Trọng will be also on the bench as he suffered a thigh injury during the match.

Previously, full-back Đoàn Văn Hậu missed out because he had not recovered from a knee injury.

Park has called-up defender Trần Văn Kiên to strengthen his defence against Australia who have won every match they have played in the World Cup qualifiers, scoring 31 goals and conceding only two.

He also called-up striker Nguyễn Công Phượng to train with the team after he withdrew from the first match to welcome his baby son. However, due to difficulties travelling during the pandemic, Phượng may not compete against the Socceroos.

The South Korean manager will have some players back in action. Midfielder Trần Minh Vương, defenders Bùi Tiến Dũng and Nguyễn Thành Chung are all fit.

“From club level to the national team, from V. League to continental tournaments, Hải has shown his confidence and skilled technique. Facing a stronger rival, he will perform amazingly,” Tú said.

Australia landed in Hà Nội on September 4, and coach Graham Arnold said playing in the closed-door stadium would be great for his team as Việt Nam would not have home advantage.

He said his team were ready to bring the three points home.

Arnold said he was proud of Australia's performance beating China 3-0 last week, and they would do better in the coming game.

“We are here to make history so it’s really nice for the books, but we have more to come,” Mabil said. "We are only just getting started. I am really, really excited for what we are going to do.”

However, his teammate Martin Boyle, who scored against China, will not play due to ankle injury which sidelined him the second half.

Defender Ryan Strain will also not play due to an ankle strain.

The match will be officiated by Abdulrahman Ibrahim Al-Jassim of Qatar and will kick-off at 7pm and air on VTV6. — VNS

The Local Game: Put some respect on Huỳnh Như’s name

Runner Chinh back on track for SEA Games

Striker Châu Đoàn Phát will be the youngest player for Việt Nam at the upcoming FIFA Futsal World Cup. He is confident of a good performance at the biggest tournament of his career so far.

Coach Park Hang-seo praised his players' efforts after Việt Nam lost to Saudi Arabia by three goals to one in their opening World Cup qualifier on Friday in Riyadh.

For just over an hour in Riyadh early Friday morning, Việt Nam had hope they could pull off a famous victory against Saudi Arabia, thanks to a sumptuous Nguyễn Quang Hải goal.

Nguyễn Thị Hải finished in 10th place in the women’s shot put at the Tokyo Paralympics on Thursday morning.

Vietnamese forward Nguyễn Tiến Linh is among outstanding footballers featured in a special poster of the International Federation of Association Football (FIFA).

Goalkeeper Đặng Văn Lâm is ready to play for Việt Nam against Saudi Arabia on September 2 in the third qualifying round of the 2022 World Cup in Asia.

Free kicks could be key to unlocking Saudi defence

Midfielder Nguyễn Quang Hải knows getting a result in their World Cup qualifier against Saudi Arabia will be a tough ask, and Việt Nam need to take any given opportunities to grab a goal.

The Local Game: Dreaming of what could be

VinFast chooses US Bank as preferred provider of vehicle financing

SSIT seeks approval for the entry of large vessel