On May 23, the US White House announced the launch of the much-awaited economic initiative, with the claimed dozen of initial partners – Australia, Brunei, India, Indonesia, Japan, Republic of Korea, Malaysia, New Zealand, the Philippines, Singapore, Thailand, and Việt Nam – which together cover 40 per cent of the global GDP. 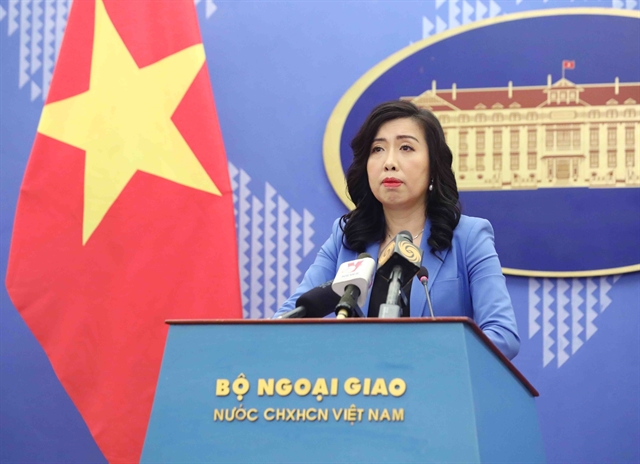 HÀ NỘI — Whether any country, including Việt Nam, will officially accede to the Indo-Pacific Economic Framework for Prosperity (IPEF) unveiled by US President Joe Biden earlier this week, depends on the outcomes of the discussions, foreign ministry spokesperson Lê Thị Thu Hằng said on Thursday.

On May 23, the US White House announced the launch of the much-awaited economic initiative, with the claimed dozen of initial partners – Australia, Brunei, India, Indonesia, Japan, Republic of Korea, Malaysia, New Zealand, the Philippines, Singapore, Thailand, and Việt Nam – which together cover 40 per cent of the global GDP.

Vietnamese Prime Minister Phạm Minh Chính attended the kickstarting ceremony for the discussions for the framework, Hằng noted, in response to queries on clarification of the first group of participating countries during the press briefing in Hà Nội.

The spokesperson stressed that this is just “the launch of the discussions for the framework,” and during the discussions, Việt Nam together with other ASEAN countries and relevant partners will have talks and clarify the parameters of the IPEF, with the focus on four pillars – Connected Economy, Resilient Economy, Clean Economy (decarbonisation and green infrastructure), and Fair Economy (taxation and anti-corruption) – to bring about positive, effective economic agenda for the countries and the region, towards a cooperation framework that brings practical benefits to the people, contributing to the peace, stability, development and prosperity of the region and the world

IPEF will need to be an open, inclusive, transparent initiative, and one that is in line with international laws, as well as respecting ASEAN centrality, and should complement existing economic linkages, Hằng noted.

With the policy of building an independent, self-reliant economy in association with proactive, extensive and substantive international integration, Việt Nam has already acceded to a number of economic connectivity initiatives, to fully harness the domestic and external resources in the national construction and development processes, she added.

Responding to questions on the production lines in China shifting to Việt Nam as the former still pursues its stringent zero COVID policy, Hằng said Việt Nam considers foreign investment an important resource in economic development, the strengthening of international cooperation, and in the deeper integration into global value chains.

Việt Nam always pays attention to making improvements to its business and investment environment, facilitating foreign firms conducting their businesses and investments in the country, she continued.

Recently, to enhance production in the post-pandemic recovery period, the Vietnamese Government has synchronously and resolutely implemented various reforms to build up the trust of and attract foreign enterprises to Việt Nam.

The spokesperson said that in the time to come, Việt Nam will focus on boosting productivity, improving the quality of infrastructures, training high-quality human resources, and developing better policies to encourage foreign investors to invest or expand their investments in Việt Nam, especially ones that are lined with the country’s development priorities, likes ones utilising new, advanced, green technology, modern governance with high added value, and far-reaching impacts with regards to connection to the global supply chains.

Việt Nam and Cambodia are actively working on addressing the remaining 16 per cent of the border line that has not been demarcated.

The spokesperson for the Vietnamese foreign ministry Lê Thị Thu Hằng made the statement on Thursday during the press briefing in Hà Nội in response to queries about Việt Nam’s reaction to Cambodian Prime Minister Hun Sen’s comments on new progress in demarcation efforts.

Phnom Penh Post earlier reported during his recent visit to Europe, Cambodian Prime Minister Hun Sen in talks with Cambodian diaspora have said negotiations have been completed for 6 per cent of the remaining 16 per cent of un-demarcated borders between the two countries.

The Cambodian leader said he had invited his Vietnamese counterpart, PM Phạm Minh Chính, to visit Cambodia and put a signature on this 6 per cent, while critising unfounded accusations that he is "ceding" land to Việt Nam, according to the newspaper.

Spokesperson Hằng said the completion of the demarcation of the land border line for friendship and development between Việt Nam and Cambodia is a legitimate wish and aspiration of the two countries’ peoples.

In that spirit, in recent years, the two sides have closely cooperated to demarcate 1,045km, or 84 per cent of the entire border line between the two countries, Hằng continued.

This outstanding achievement has facilitated the travel, trade, and people-to-people exchanges between Việt Nam and Cambodia, as well as contributed to the socio-economic development in each country, she added.

Currently, the two countries’ relevant bodies are negotiating effectively to identify and address the matters concerning the demarcation of the remaining 16 per cent of the border line, spokesperson Hằng said. — VNS

Prime Minister meets President of Chamber of Deputies of Luxembourg

The 15th National Assembly heard a report on and debated the draft Law on Inspection (amended) yesterday morning as part of its ongoing third session.

Vietnamese Ambassador Đặng Hoàng Giang underscored the critical importance of protecting civilians in armed conflicts while addressing an annual open debate on the issue at the UN Security Council (UNSC) on Wednesday (US time).

Việt Nam to contribute to building foundation for Asia’s future

Deputy Prime Minister Phạm Bình Minh is on a working visit to Japan from May 25-28. Vietnam News Agency correspondent in Japan talked to the Vietnamese Ambassador to Japan, Vũ Hồng Nam about this event.

Việt Nam attaches importance to and wants to deepen relations with the EU, Minister of Foreign Affairs Bùi Thanh Sơn affirmed during his phone call with the Vice President of the European Commission (EC) and EU High Representative for Foreign Affairs and Security Policy Josep Borrell late Tuesday.

A send-off ceremony for the 2nd sortie of Rotation 4 of Việt Nam’s Level-2 Field Hospital to perform duties in the UN peacekeeping missions in South Sudan was held on Tuesday in the military airfield of Division 371 of the Air Defence – Air Force Service.

Standing Deputy Prime Minister Phạm Bình Minh will attend the 27th International Conference on the Future of Asia and pay a working visit to Japan from May 26-27, the Ministry of Foreign Affairs has announced.

Presenting a report at the third plenary session of the 15th-tenure National Assembly in Hà Nội on Monday, President of the Vietnam Fatherland Front (VFF) Central Committee Đỗ Văn Chiến listed a number of hot-button issues raised by voters.