The Mekong Delta Province of Hậu Giang will advertise its potential and strengths, promote trade and tourism while introducing a list of projects calling for investment during an upcoming investment promotion conference in the locality. 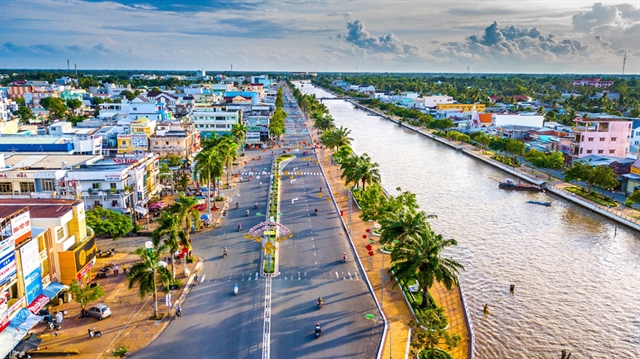 A part of Hậu Giang Province. — Photo provided by the province

HCM CITY — The Mekong Delta province of Hậu Giang will advertise its potential and strengths, promote trade and tourism while introducing a list of projects calling for investment during an upcoming investment promotion conference in the locality.

The conference, slated to be held from June 15 to June 18, will create favourable conditions for domestic and foreign businesses to learn about the province's mechanisms and policies, its investment incentives besides its prioritised projects, director of the provincial Department of Planning and Investment Trần Ngọc Hùng told a press conference in HCM City on Wednesday.

Hùng also described the event as a good chance for management agencies, organisations and investors to discuss measures to help the province attract more investment to promote its socio-economic development in the near future.

Five seminars discussing Hậu Giang's potentials and opportunities in the fields of industry, agriculture, urban development, tourism and IT will be held on the sidelines of the conference.

For his part, Chairman of Hậu Giang People’s Committee Đồng Văn Thanh said his province was committed to facilitating businesses with the establishment of a steering committee for investment promotion and support. This would guide and support investors in fulfilling investment procedures in a timely manner.

Speeding up investment procedures and land clearance while ensuring sufficient infrastructure for investors were also included, Thanh said at the press conference.

The chairman said the upcoming conference would demonstrate his locality's determination and desire in promoting the province's potential, opportunities and competitive advantages to the businesses, especially those in HCM City.

Recently, the committee approved the list of 35 projects seeking foreign direct investment between now and 2025.

These projects, worth a total US$876 million, are in a wide range of sectors including construction of industrial zones and clusters, industry, farming, trade and service, tourism, and healthcare. — VNS

More processing plants licensed to export pangasius to US

The National Agro-Forestry-Fisheries Quality Assurance Department (NAFIQAD) has announced that the US has licensed six more Vietnamese pangasius processing factories to export to the market.

Why the stock market sell-off when VN’s economy is strong?

The sell-off in the Vietnamese stock markets has been consistent with what has been occurring in global markets, though selling pressure was exacerbated by many new retail investors dealing with margin calls for the first time and a crackdown on firms that borrowed money to buy stocks.

Vietnamese are tending to consume foods of clear origin and high quality after the COVID-19 pandemic, causing many export-oriented food brands to turn their attention to the domestic market.

Ratings of Vietnamese banks are expected to be continually improved thanks to Việt Nam’s positive sovereign credit rating.

The Ministry of Industry and Trade has just issued Decision No 924/QĐ-BCT on terminating the application of anti-dumping measures to a number of galvanised steel products originating from South Korea and China.

Undisbursed funds for public investment projects could be recalled if local governments failed to implement said projects for an extended period of time, said Deputy Prime Minister Lê Minh Khái in a meeting with local officials in Hà Nội on Thursday.

Cassava exports up but trade deals not capitalised on

Việt Nam exported 235,000 tonnes of cassava and cassava products worth US$105.01 million in April, up 10.8 per cent and 31.7 per cent in volume and value year-on-year, according to the General Department of Customs.

Market edges up slightly due to bull-bear tug of war

The market reversed the downward trend in the morning to end slightly higher in a late-session rally on Thursday.