HANOI, VIETNAM - MediaOutReach - 20 August 2019 -In June 2019, Bosnia - Herzegovina PresidentMilorad Dodik had a meeting with Mai Vu Minh - Chairman of the Board ofDirectors of SAPA Thale group - on the investment cooperation of Vietnam,Bosnia -- Herzegovina and Europe.

These meetings are within theframework of the program of "the Bilateral Investment Cooperation betweenSAPA Thale Group and the Government and Leading Businesses of Bosnia -Herzegovina." 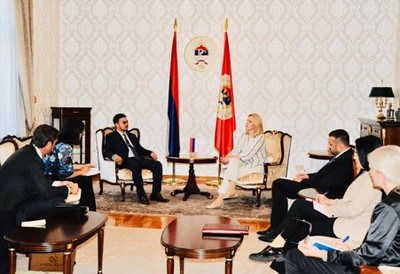 Billionaire Mai Vu Minh in a meeting with Srpska President Zeljka Cvijanovic.
At the beginning of 2019,accepting the invitation of Dubai Department of Economic Development and DubaiInvestment Development Agency (Dubai FDI), SAPA Thale group chairman went toDubai to work with Dubai FDI and leading enterprises such as Emirates NBD, DPWorld, DIFC, DMCC ... about the co-operation to invest in Vietnam and manyother countries around the world.

Mai Vu Minh said that thecommercial potential of Southwestern European countries, the Middle East isvery big and the investment co-operation program contributed to boostinginvestment and trade co-operation among not only Vietnam and these countriesbut also many other countries.

Billionaire Mai Vu Minh was praised by Prime Minister Nguyen Xuan Phuc for his many contributions to Vietnam's economic development.
SAPA Thale is a financialgroup based in Germany and present in many countries around the world. Thechairman of this group is billionaire Mai Vu Minh, who holding many projectsand shares of large corporations in countries around the world.

SiteMinder Research Shows Travel is Returning and Intent to Spend is Strong, Despite Rising Costs

LaLiga & GCOX Seal Partnership for Asia and the Middle East

Việt Nam calls for eliminating all forms of discrimination against women, girls