Na Rin An Wins HFG Championship 2020 For The First Time

Na Rin An Wins HFG Championship 2020 For The First Time

INCHEON, SOUTH KOREA - Media OutReach - 9 November 2020 - Na Rin An emerges victorious yesterday at the KLPGA Hana Financial Group (HFG) Championship 2020after she pulled ahead of her competition with a fantastic final round. Shestarted the day tied for lead with Ha Na Jang and Min Ji Park, but soon surgedahead as the latter two struggled with the cold weather and strong wind. Na RinAn shot 1-under par for the final round, winning the Championship with a total scoreof 280, 8-under par, which is three shots ahead of the runner-up Ha Na Jang. 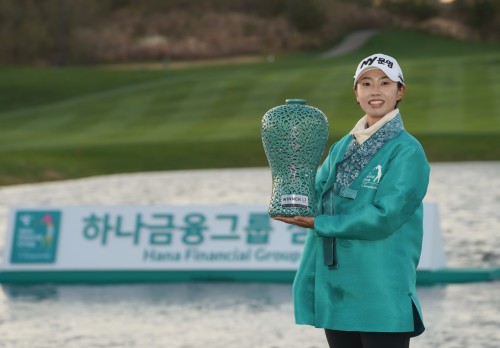 Na RinAn takes home the prize money of KWR 300 million (US$268,000). With this win, shealso moves up the KLPGA Player of the year rank to eighth, and for the 2020money ranking to second.

Whatdid you think of today's win?

Na RinAn (NRA): It took me four years to earn my first win (at the Autech CarrierChampionship 2020) a month ago, but here I am picking up a second win, which isearlier than I expected to win again. I'm really glad about it. I will workeven harder from now on.

Youlooked a little shaky on the final day of your first win even though you had a10-shot lead. However, you performed differently today and was really calmthroughout. What were your motivations for this tournament?

NRA:For the Autech Carrier Championship last month, I was very nervous on the finalround since I didn't have any experience in winning the tournament. I think that'swhy my play didn't work out the way I wanted it to.

However,I tried to focus more on my own game today and this worked out really well witha good result.

Anystrategies about the wind and cold weather?

NRA:I've experienced a lot of tournament courses with strong wind for the pastmonth, and these experiences helped me a lot in doing well at this championship.

NRA: Istarted playing golf since September/October 2009. When I look back, I think Iwas very diligent and sincere, trying to focus more on my work. There is nothingspecial about my golf except the steady practice.

Whatwere you thinking after your first bogey made at the 17th hole?

NRA:Obviously, I made my first bogey today on the 17th hole, and I was nervous whenI was having the bogey putt. Anyway, I tried to focus on the game after that andthought to myself, "I wish to go in the direction of losing with as few strokesas possible". This turned out nicely with a great result.

Whathas changed for you this year from last year?

NRA:Statistically, my record of greens in regulation improved. I've been changingmy swings steadily and my body got used to it, so I think this is the reasonwhy my games are going well.

Beforechanging my swings, the ball contacts were not constant, leading me to a lowrate of greens in regulation.

NRA: Itwill be good for me to earn the title, but for the last tournament, I will focuson my game and playing rather than to earn the tile.

NRA: Iam keen on playing in overseas tours when I get the opportunity to do so. Thisis because I want to gain more experience. I want to develop my game furtherbefore venturing to play in an overseas tour.

NRA: Ithink I'm more satisfied with my iron shots at the Autech Carrier Championship lastmonth rather than at this tournament. It was also very windy then, but it wasnot really cold. However, at this tournament, the wind was very strong, and theweather was very cold. This led me to make more missed shots.

Whatare your plans on using the prize money from this tournament?

NRA:Last night before the last round, I had chance to talk to my mom about a car.My mom actually told me that she would buy the car for me if I win once more.Today I have won the tournament, so I will tell my mom that we can get a car.

Whatare your goals for the next tournament?

NRA: Iwill try as hard as I can to get the best result possible by using up all myenergy and power.

Whatis your driving force for the win?

NRA: Iwould say it's my family. I gain more power and strength through the support ofmy parents and my younger sibling.

Howwould you like to be known as the player Na Rin An?

NRA:Diligent and sincere golfer who works hard. A player who actively pursuits herown goal and successfully completes her own task and role.

Throughout the years,the Championship has been the birthplace of world-class players such as Mexicangolf hero Lorena Ochoa, US-based Juli Inkster, Britain's LauraDavies, and Taiwan's Tseng Yani. It has also enabled Korean playerslike Jin Joo HONG, Na Yeon CHOI, Jin Young KO, Kyu JungBAEK and In Gee CHUN to advance into the world stage of US LPGA.

ECOVACS ROBOTICS is coming to 11.11 Malaysia Shopping Festival with Its Largest Promotion Deals

ECOVACS ROBOTICS is coming to 11.11 Malaysia Shopping Festival with Its Largest Promotion Deals

93rd anniversary of Communist Party: its ultimate goal to serve the people

PM orders sectors and localities to boost production and trade