With the opening of the first Uniqlo store in Việt Nam, HCM City has added another fashion giant to its growing list of popular brands. 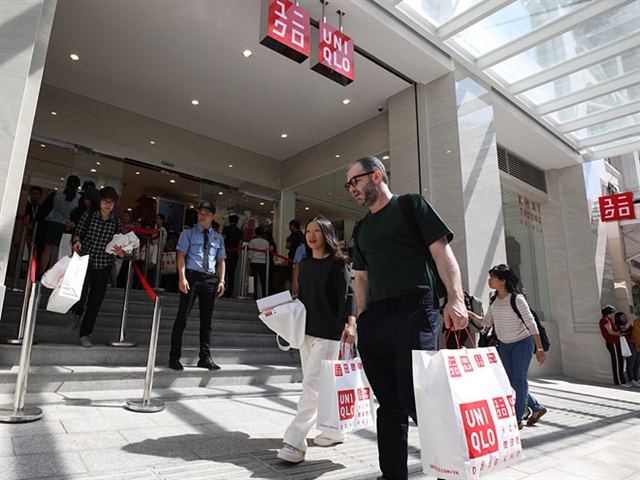 Thousands of people wait in line to shop at the first Uniqlo store in Việt Nam on its opening day. — Photo courtesy of thanhnien.com.vn

HCM CITY — With the opening of the first Uniqlo store in Việt Nam, HCM City has added another fashion giant to its growing list of popular brands.

On its opening last month, the Japanese-owned Uniqlo store on District 1’s Đồng Khởi Street attracted more than 2,000 customers waiting in line to shop, generating VNĐ5.5 billion worth of sales.

According to the Thanh Niên (Young People) newspaper, queuing to have the first shopping experience in HCM City is not new, as similar cases were seen when H&M opened its first store in Vincom Centre downtown.

Uniqlo, Zara and H&M are three giant fashion names that have chosen HCM City as their first market in Việt Nam.

Similarly, Calvin Klein, Mothercare, Old Navy and Mango initially settled in HCM City before expanding their business to Hà Nội and other cities.

In addition to world-famous fashion brands, local firms such as Canifa, NEM and Ivy Moda have successfully grown their business nationwide, with the first stop being HCM City.

More than half of about 110 Canifa stores are located in HCM City along Cách Mạng Tháng Tám Street, Võ Văn Tần Street and Hai Bà Trưng Street, among other prime locations.

While Canifa’s revenue was over VNĐ1,000 billion last year, other brands generated VNĐ400 billion to 500 billion each.

Thanh Hương, a shop owner in District 3, said that it is easy to score some fashion items at reasonable prices from Marc, Guma, Toto, Clothe or Angle Lam while wandering around Lê Văn Sỹ or Trần Quang Diệu streets.

“These brands have high-quality clothing and do not sell mass products. Clothing from Zara or H&M might be considered cheap overseas, but they are not affordable to HCM City réidents,” she added.

Thái Thanh Hiền, a retired official, said that she has been wearing dresses from Miu Rex Tokyo for years.

“The store always gives me a heads-up when it has a promotion. I usually buy up to four pieces of clothing when they're on sale,” she added.

In addition to districts 1 and 3, District 5 hosts many popular fashion stores, including Yame, Toto, Lime Orange, MWC, Sóng Nhạc, SuSu, and Kboy, among others.

As many foreign retail groups enter HCM City for business, the fashion market has become very competitive and expensive to invest in.

A representative of Uniqlo said that high real estate prices had made it challenging to find a perfect spot to launch the premium fashion store.

This explains why many Vietnamese fashion chains cannot expand their businesses as their financial resources are not sufficiently strong.

HCM City is a young, attractive market with huge consumer potential, according to experts.

According to research conducted by Nielsen a year ago, Vietnamese people’s love for branded items ranks third worldwide, after China and India.

This statistics are surprising as Việt Nam is officially classified as a low- to middle-income country.

Meanwhile, Statistics Portal, a German research company, predicts that the annual growth of the Vietnamese fashion market will reach more than 22 per cent between 2017 and 2022.

Vũ Quốc Chinh, a marketing expert from HCM City University of Economics, said that HCM City has a large market size with 10 million people who have a higher than average income.

“Fashion brands and luxury brands always aim for cities with the largest purchasing power, like HCM City. Though locals' higher incomes do not necessarily mean they are willing to pay, HCM City people love to try new things,” Chinh said.

Most market research has pointed out that southern consumers are sensitive to experiencing new things and taking challenges. This has shaped a fast-changing consumer culture, which is beneficial to business development plans, he added.

Northern people are also fond of luxury products, but being a more conservative part of Việt Nam, it takes more time to successfully introduce a product to northerners.

As such, it is safer for fashion brands to start from HCM City.

Despite this, Chinh admitted that “a good piece of cake often attracts lots of flies” and the fashion market in HCM City is highly competitive.

It is important for fashion firms to constantly update their portfolios and services.

A retail expert from Hà Nội, Vũ Vinh Phú, said that purchasing power in HCM City is higher than that of Hà Nội, particularly for fashion goods.

The young generation from the north might be able to catch up with the south soon, but it is not the case with the older generations.

“As HCM City is a centre for young artists and passionate youth, it is easy to understand that it is the perfect spot for fashion brands to settle their business there,” Phú added. — VNS

A folk painting style on the verge of fading away

We have lucky enough to have a chance to visit Long Cốc tea hill in the northern mountainous province of Phú Thọ, which is considered one of the most beautiful tea hills in the country, in a winter day.

Pop diva Mariah Carey has had a long list of hits over the years, but her classic holiday song has helped her make history as the first artist to top the Billboard charts in four separate decades.

The central city has recognised the Hoàng Sa (Paracel) Museum as a new destination on the tourism map just 22 months after the museum was opened to the public.

For three decades, paleontologists the world over have been split over a provocative finding: did a dwarf species of Tyrannosaurus rex really once exist?

Exhibition offers audience chance to get to know abstract and minimalism

VICAS Art Studio will open an exhibition today offering art lovers the chance to get to know more about abstract and minimalist art.

An exhibition celebrating the diversity and beauty of the female body, in all its forms, will open tomorrow at the QUA Gallery in Hanoi Rock City (HRC).

The story behind ABBA and Việt Nam

This time of year you'll probably be hearing lots of ABBA in Vietnam, but why is an obscure song from 40 years ago still so popular here?

Việt Nam calls for eliminating all forms of discrimination against women, girls