The 'count' of bamboo straws

The name Nguyễn Văn Mão, or Mão Mèo (Cat), is quite well known in the national start-up community. Harbouring a passion for bamboo flutes since he was a senior at college in 2012, Mão now earns VNĐ25–30 million (US$1,000–1,300) per month from selling his instruments. 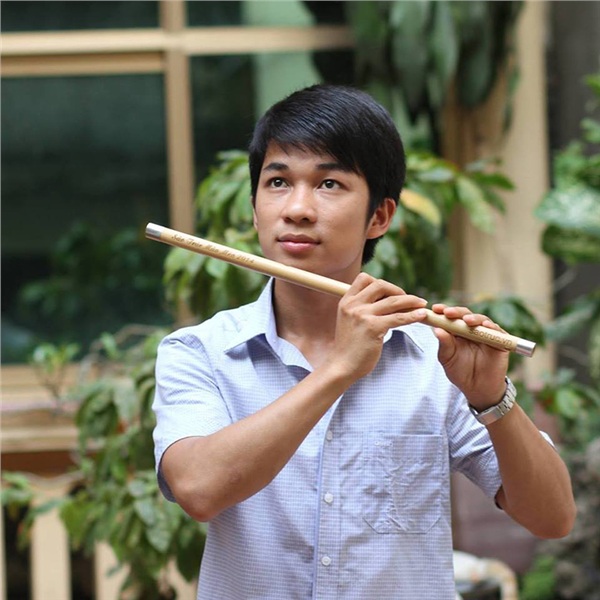 The name Nguyễn Văn Mão, or Mão Mèo (Cat), is quite well known in the national start-up community.

Harbouring a passion for bamboo flutes since he was a senior at college in 2012, Mão now earns VNĐ25–30 million (US$1,000–1,300) per month from selling his instruments. In 2013 he opened his first shop selling mostly bamboo flutes and other musical instruments. Four years later he had 23 stores all over the nation, with total revenue of over VNĐ2 billion ($85,700).

However, Mão would rather be better known for his bamboo straw business.

The 32-years-old from Nghệ An Province is the owner and founder of three bamboo straw plants, one in Hà Nội (which also produces bamboo flutes), one in Đồng Nai and one in the process of being built in the Central Highlands.

Mão nurtured his bamboo plan for over a year, and now his products are exported to Germany and India, and he is in negotiations to ship them to other countries like Australia, the US, Finland and Poland.

Mão also wants to invest in bamboo brushes, spoons and cups. If his project goes as planned, his star will continue to rise.

“I feel like I have a connection with bamboo that has created a surprising result for both sides,” said Mão.

He recalled his idea began from a conversation with a foreigner.

“Beautiful flute! Do you have the same in a smaller size?

It brought to mind the image of rượu cần (rice wine in terra cotta vase), which used to be drunk through long bamboo stems.

“In recent years, social networks have been full of concerns over plastic waste. Images of turtles and fish choking on plastic straws are like a red alert for many people," said Mão.

The young man saw this was a God given chance, while he also had experience with the source, so he decided to grab it. The first orders were failures, as the boiled tubes were too wet or got burned. Other times, they had a strange smell and unattractive colour.

After experimenting with the technique, now he is finally happy with the results, he said.

His products can be found up and down Việt Nam, and he has displayed them at international trade fairs.

“Many developed countries in Europe and Asia are taking environmental issues seriously, and some have banned plastic straws while they do not have bamboo in their natural habitation," he said.

“It is really a potential market.”

With over 100,000 chaffs produced every day, the exploitation of natural resources is huge, which is a question Mão gets asked a lot.

But according to him, the answer is safeguarding.

“Chaffs can be reused many times for a maximum of six months. They are biodegradable, so they do not cause harm to the environment, and can be used as an alternative to plastic.

"The materials to make chaffs can be reused every two years. The exploitation of this plant has also developed the surrounding vegetation and limited deforestation. Although it is only small-scale, better late than never," he said.

Do your best and let God do the rest!

The young entrepreneur talks frankly about his ambitions.

“I think the same problem for many young start-ups is they are afraid of what people say about them. Many fail to see what future might hold for them, so they give up," Mão said.

"People say that if you follow your passion, success will follow, but for me it is just a bonus and only temporary.

"The biggest question to ask yourself is: 'If you dare you can succeed or fail. If you do not dare, you’ll get nothing back.'

"When starting something, remember not to put money first. When I was younger, I tried to make good flutes to give to people; I only thought about selling them later on. Those people became regular clients, and there was no calculation in it. If you think of profit first, once you lose your capital, you will quickly give up.

"Finally, when you decide to do something, give it your best shot.”

“I am grateful to be able to preserve and promote a cultural value. Ten years ago, it was rare to find someone playing the flute. Now I see it more," he said.

"I should be proud of it as it shows traditional musical instruments are making a comeback. I want to make the best flutes for the community, and I will keep doing it for years to come.” — VNS

The glass noodles village on the Nhuệ River

A short course will never be enough to master life skills

When the phoenix flowers bloom it is a sign of summer vacation, and parents start to search for the perfect courses and programmes to help their children grow and succeed.

'Magician' of percussion dedicates his life to audiences

When percussionist Trần Xuân Hòa walks down the street, he keeps his ears open to all the sounds around him. Every noise, from the pitter-patter of footsteps on the pavement to the revving of a motorbike engine, has the potential to inspire him to create a special percussion performance.

Vietnamese beach dining with Spanish flair: the best of both worlds

Weekends are the busiest time on the beach at Melia Hồ Tràm Resort & Spa. It was Friday night, and a company was having a staff party with loud music and a lot of people. The atmosphere was electric and I shared in their joy and positive energy.

Practice makes perfect... if you spend your time wisely

OK, by the time you read this, the US Open will have finished, or if you get early delivery, will be on the last round, My picks are pretty commonplace – Dustin Johnson, Brooks Koepka, Tiger Woods and Phil Mickelson. Yeah, the last two are emotional picks which have zero to do with logic. We will see…

Việt Nam is currently the second largest exporter of lychee in the world. Around 19 per cent of the fruit consumed globally is grown right here.

On our visit to Phạm Huy Thông Antiques Museum in Quảng Yên Commune, the northern province of Quảng Ninh, the antique boats left the biggest impression on me. The museum is the brainchild of archaeologist Nguyễn Việt, director of the Southeast Asia Prehistoric Research Centre. Việt named the museum after Professor Phạm Huy Thông (1916-1988), who inspired much of his archaeological research.

Stir-fried prawns with butter and milk

If you want to indulge with fresh and flavoursome prawn creations, why not try this recipe for stir-fried prawns with butter and milk by Chef Nguyễn Văn Tuân from Fortuna Hanoi Hotel.