The Brazillian star determined to make it in Việt Nam

It's 17,000km from the beaches of Rio de Janeiro, but Claudecir dos Reis Rodrigues Junior has never felt more at home.

It's 17,000km from the beaches of Rio de Janeiro to Việt Nam, but Claudecir dos Reis Rodrigues Junior has never felt more at home.

However, his journey has been a little bit different to most expats; Claudecir came to Việt Nam to play professional football.

"Việt Nam became my second country as it opened the doors for me to football internationally, where I learned many things,” Claudecir told Việt Nam News.

“I found different cultures, foods and connections with different types of thoughts. This motivates me a lot,” he added.

“When I arrived in 2016, people treated me very well. It always felt familiar, I couldn't understand why! But I feel like it did me a lot of good. I hope many good things will come to me.

Claudecir now considers Việt Nam his second home and has no intention of leaving.

The Brazillian striker was widely known in the jersey of Quảng Nam FC, scoring 12 goals in his opening season with the club. A season later, his side won the V.League 1 for the first time and Claudecir was given the best foreign player award of the season.

However, it hasn't all been plain sailing for Claudecir since he decided to move 1,000km across the world.

“I hope that I will have more opportunities to play football in Việt Nam. Money is important to every player, but for me, that's not the story. I need to prove to myself, to my family and the fans of this country," Claudecir said.

“I train hard every day, to increase my health as I don’t know when a club will call.

“I think, the immediate challenge will be very arduous. However, I believe in my ability to play as well as my personality on the field. That's why I don't want to go to another country to play. I know that I have not shown all my talents to the Vietnamese fans,” Claudecir said. 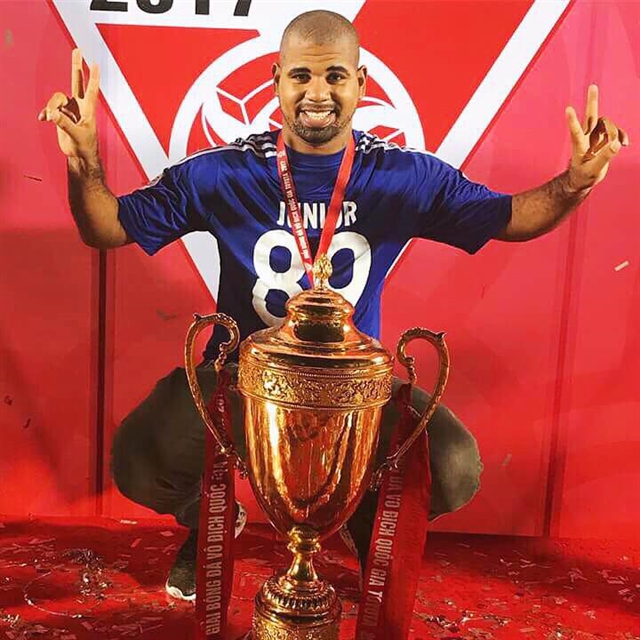 Claudecir won the V.League 1 with Quảng Nam FC in his second season with the club.

“I am very nervous in each challenge. I believe that many people in Việt Nam believe in my ability to play football. Of course, I can't play well all the time. Like Neymar or Lionel Messi, for example, they sometimes have good and bad performances.

Despite it all, Claudecir has many good memories in Việt Nam and wants to make even more.

“I don't want to start again in another country. I love to discover new places in Việt Nam. Everywhere is so beautiful, but Hội An is my favourite place. I love the beach."

Having traded Copacabana for the sands of Hội An, the boy from Rio has no intention of switching back. — VNS

Why do so many foreigners decide to make Việt Nam their home?

Mark has years living in Hà Nội with his wife, where they have been collecting utensils from ethnic minority groups. Earlier this month, he donated 500 objects from his collection to the Vietnamese Women’s Museum.

How to increase expat engagement at the SEA Games

The much-anticipated SEA Games 31 have finally begun, and I for one am excited to have the opportunity to see the region’s best athletes compete so close to home.

Australian honoured for sustained promotion of sustainable development in VN

Australian expert Timothy Edward McGrath passed away on April 18 after a short serious illness, which left a big gap both professionally and personally for GIZ staff members, his partners, his family, and friends.

Akari Nakatani is flying the Vietnamese flag in her home country, helping to spread the word about Viet Nam to a Japanese audience.

The oldest performing art is alive and kicking in the capital

Poetry is the oldest form of literature, but, long before pen touched page, audiences have been enthralled by spoken word performances. Thanks to Waifs and Strays, Hà Nội's premier spoken word night, the world’s oldest performing art is truly alive and kicking in the capital.

Italian model Elia Marchetti hit the headlines when he appeared on the popular reality show, Quý Ông Hoàn Mỹ (The Next Gentleman).

Kaneya Manabu is humorous, energetic, open and smart when he presents topics on his Hoc TV YouTube channel.

Joy Kil – teacher by day, comedian by night - is a wisecracking stand-up artist who taps into the 'expat' experience in Việt Nam for her material, and takes no prisoners along the way.