On the afternoon of December 22, 2021, while the father was out for work, Trang grew frustrated while tutoring the girl at home. She scolded and beat the child using a large wooden stick for four hours, leading to her death. 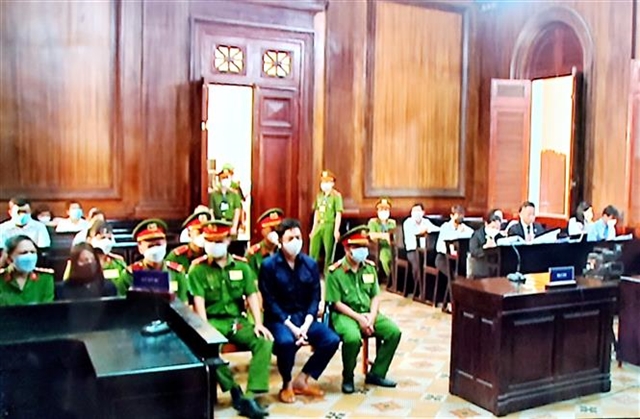 At the trial. VNA/VNS Photo

The court also handed down a sentence of eight years in total to Nguyễn Kim Trung Thái, 37, the child's father: three years in prison for 'torturing others' and an additional five years for 'concealing crimes'.

According to the city People's Procuracy, the criminal behaviour of the defendants is particularly dangerous for society as they committed crimes against a child.

The murdered girl was the daughter of Thái and his ex-wife. In August 2020, the couple divorced, and Thái was given custody.

In September 2020, Thái started living with his girlfriend Trang at an apartment in Bình Thạnh District in HCM City. The daughter also lived with them.

On the afternoon of December 22, 2021, while the father was out for work, Trang grew frustrated while tutoring the girl at home. She scolded and beat the child using a large wooden stick for four hours, leading to her death.

Knowing Trang's criminal actions, Thái deleted all the camera data of the apartment to conceal the crime and hinder the investigation. Thái's conduct constitutes a cover-up of the crime.

Regarding her motivation, Trang said she beat and tortured the child because she did not study well.

However, the child's teacher and nanny verified that the girl was obedient, polite, and a good student.

The camera data shows that Trang often beat the child.

Neighbours' testimonies also revealed that the child suffered from violence numerous times before the fatal event.

Trang was arrested on December 23, a day after the child's death, following a hospital report on the girl's unusual wounds and injuries. On December 28, she was charged.

The father was detained on December 31 on suspicion of the same crime.

Belgium and American experts will train on cell therapy technology and transfer CAR-T cell culture techniques to the National Institute of Hematology-Blood Transfusion (NIHBT) to improve the ability to diagnose and treatment of blood diseases in Việt Nam.

More research is needed in order to build a comprehensive roadmap for the replacements in each locality, the Institute for Transportation and Development Policy has said.

The country’s largest fruit producing province has more than 80,000ha of fruits with an annual output of 1.5 million tonnes.

Parks must be improved for the community

Many new park projects are still on paper while old parks are being encroached upon illegally.

Statistics from the Ministry of Education and Training also show that in the first ten months of this year, about 16,000 teachers quit their jobs, most of which were preschool educators.

The decision was made after a police investigation into a mass food poising which hospitalised 665 students and teachers and killed a Malaysian-Vietnamese student named Lee Zhe X., aged 6.

A comprehensive approach is needed among all sectors and stakeholders to reduce the risks associated with non-communicable diseases (NCDs), and to promote interventions to prevent and control them, medical experts said.

Việt Nam Railway Corporation (VNR) has requested that the Ministry of Transport urgently invest VNĐ1.33 trillion (US$53.5 million) to upgrade the railway in the Hải Vân Pass area due to the impact of typhoon Sonca in October.